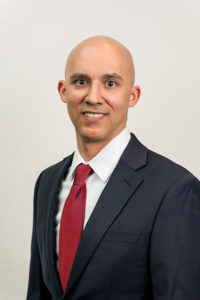 Dr. Daniel Escalante grew up in Arizona. He attended the University of Arizona on Regent’s Scholarship, where he received his Bachelor of Science in Microbiology. He continued his education at Boston University School of Dental Medicine on the Army Health Professional Scholarship, graduating in 2005. He completed a 12 month Advanced General Dentistry residency at Joint Base Lewis-McCord and served 1 year in Korea before returning to Madigan Army Medical Center for his Oral and Maxillofacial Surgery residency. He completed his 4 year program in 2012. After completing his program, Dr. Escalante served as staff and Fort Benning’s Martin Army Community Hospital.

Dr. Escalante is married to his wife of 16 years and has three children. His hobbies include playing drums, guitar, music production and engineering. He is an avid skier and enjoys hiking and camping.

Back to the top